I haven't been to this blog space since january! Now I'm back and seeking redemption.

Last weekend was my first day at a new art class. For the last five years, I've taken classes in life drawing, portraiture, life drawing in oils and anatomy (for artists). They're all basically the same. You have a model, usually nude, who poses for 1 min, 5 min and 20 min intervals. Its a great class for someone with no imagination. You draw what you see in the time you have. I usually avoided drawing the face at all because it took too much time. Most of the other students were semi-retired amateur artists... most of the models were hard on their luck struggling artists. So it was all very well, very refined and very polite. 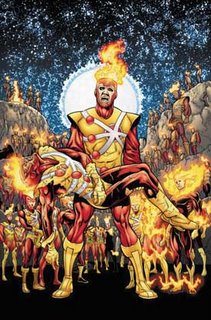 For a change of pace, I decided to sign up for a new drawing class that was offered by famous comic artist Jamal Yaseem Igle. Now I hadn't heard of Jamal Igle, but I got a very attractive email from the Art Students League with this picture attached. Turns out Jamal Igle has a large fan following in the world of action comics. So I thought, why not? Cartooning has to be an extension of life drawing, right? Wrong!

For my first day at class, I bought an 11x14 newsprint pad, some HB pencils, a Staedtler drawing pen, a few Conte crayons and an assortment of white and pink erasers. Jamal Igle, a broad black guy, very easy to talk to, not at all like someone with 28000 googleable internet mentions, was late. His students, ranging from 8yrs to one lonely retired gent, were very early. They were also predominently male and very very young (this has not happened in any art class before). I had a few minutes to feel old and frumpy before Jamal walked in with a thick leather portfolio and some 'required reading' text books.

We did introductions first. We had to answer two questions 'What do you read?' and 'Why are you here?'. Answers to the first were very specific; ' I love Sirius', or 'Rumiko really inspires me'. It took me some more googling to figure out that Rumiko is a manga comic artist... Sirius another action comic person (artist, writier, I don't know...). I didn't want to sound ancient by saying that 'I read Calvin and Hobbes and Asterix'. Instead I said 'I don't read too many comics. I mostly read fiction.' This earned me and the two other 'older' students a lecture and some additional required reading. My homework is to find some good DC Comics and read them before the next class.

So anyway, with that out of the way, we started with the lecture. But before that, actually, let me describe this student 'Spike'. Now I expected some students to be offbeat... I mean young men who are so passionate about comics as to wake up at 8:30 on a sunday morning have to be a little disturbed. But 'Spike' really moved me. He was dressed in the baggy pants and sweatshirt that is de rigeur for his age. His sweatshirt hood was really large for his head and all you could see were his eyes and his earrings. He had some kind of red contacts on... his eyes balls were a bright red with a greenish black center. His earrings were oversize red plastic loops that went through oversize holes in his ears. He had brought a portfolio with his own 'characters' that he had been creating over the years. He wanted to get into mainstream, maybe find a way to get into animation... he used some other technical jargon that I didn't catch. Anyway, very impressive overall.

Jamal's lecture went on to descirbe what it takes to make 'Sequential Art'. Comics and Sequential Art, which is the name of the course, is an entire field of illustration and art that I had never really thought about. Here is what I learned. To make a comic, you first need a script-writer. The script-writer is God. You do NOT deviate from the script. The next in the food chain is the Penciller. The Penciller is the Pope. Jamal is a penciller. Everyone wants to be a penciller because thats the most glamorous job. Some of the best scripters in the industry started out as failed pencillers even. Next, the inker is someone who can take the penciller's drawings and refine them into fine art. The letterer comes in next and fills in the text. And finally the colorist, who is at the bottom of the bottom of the food chain, and uses photoshop to color in the drawings. In this heirarchy of God and the Pope, the Devil is the 'Editor'. The most thankless job in the comic industry apparently, reserved for those talentless individuals who love comics, but can't write, draw, paint or use stencils, and who make their living by keeping everyone else on schedule. Jamal went on to talk about some French artists he really admired (and he mentioned Asterix... grrrr) and how, in Europe, they still did everything from start to finish by hand. He talked extensively about Juanjo Guardino, Juan Gimenez, Enri Bilal and Jean Girad... none of who I have heard of, but who I have to discover before next sunday. Anyway, so that was it... the whole enchilada! Then we got an assignment. Draw a self portrait of yourself in your fantasy world.

Do you have a fantasy world? I don't. I didn't realize how odd that was till he asked us to get drawing. I drew an anatomically accurate picture of my fantasy self. Very tall without being gauche, very slim but voluptuous, long hair with perfect curls, a nice sheath dress, strappy heels, a large Francesco Biasia bag in one hand and dance shoes in the other. Because in my fantasy, I look great AND I'm very active. I was done in 20 mins. Jamal came around and tried to sound encouraging. It was obvious that my fantasy world was largely lacking in 'fantasy' factor. I tried again. This time slightly more cartooney. Fantasy me was on skis, smiling, looking perfect in a very thin and figure hugging ski-suit. Jamal liked it a little better. I didn't like it at all. Apart from lacking in imagination (I mean I CAN ski a little... its not a complete fantasy), my art was wholly lacking in personal 'style'. So I finally drew one last picture. Super thin, stick figure me, doing some sort of ballet.

During the class show and tell, I decided to show the fashion-forward me and the anorexic ballerina. The rest of the class' work was a real revelation. All the guys had muscular bodies, they wore action figure suits like Spidey. They also all had some sort of dangerous looking weapon. Spike was tied up in chains with scars all over him. Another guy had a large cape on (over his Shwarzenegger body) and in his hand he surreptiouslly held an axe. The little boy, the eight year old kid, had a fork sticking out of his head. He had a band-aid on one side and a bird pooping on him from above. 'This is your fantasy?', I asked. 'I wanna be tough. You know. I wanna smile when things are tough'.

Jamal reviewed our drawings. When he came to mine, he was disappointed I had chosen to display anorexic chick instead of happy skiier. 'I'm trying to find my style', I said. That earned me lecture number two. 'You're an artist. You do life drawing. Thats the starting point. Don't try to force out an individual style. That will come with time.'

Thus chastised, I packed away my fancy pencils and pens and came home a little deflated. I'm finally in a class where I'm completely out of my element. And I haven't found my style. Everyone needs to have an individual form of expression. When you are drawing from life... its not so important. You can fake it. Copy the strokes of master artists. But in cartooning, a copy is a copy. Its never going to be your own, and its never going to be cool. I've been practicing a bit since yesterday. I've discovered that I can't make faces. I especially can't make angry faces. I can make pretty pouty faces. Some happy faces, some suggestive faces. But my characters can never ever express anger. Hah! For someone like me, theres a real irony!
Nayantara at 11:09 PM
Share